A troubling trend: heartworm disease is on the rise, all over the country. Traditionally, we haven’t heard a lot about it in the Pacific Northwest, but the incidence of reported positive tests in Oregon increased by 110% between 2012 and 2017, compared to only a 39% increase in the number of tests performed! The number of positive cases is increasing faster than the number of tests performed! Even more shocking, Washington experienced a 183% increase in positive cases! In the first 10 months of 2020, reported cases in Oregon were 33% higher than in all of 2019; in Washington, reported cases were 38% higher. 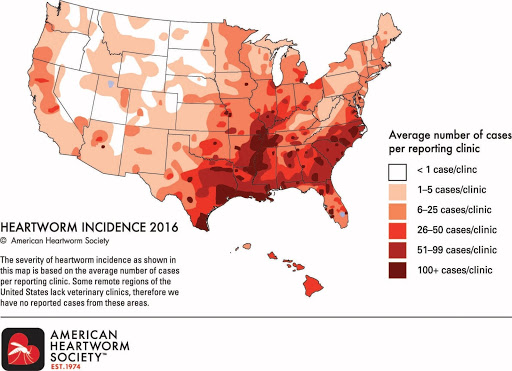 So, what is heartworm disease? Like it sounds, heartworm is a parasitic worm that sets up shop in the heart of susceptible mammals (more specifically the right atrium and pulmonary arteries). The larvae are passed from one infected animal to the next by mosquitos. Once the animal has been infected with microscopic larvae, the worms spend 5-6 months traveling through the body until they arrive in the heart as adults, up to 12 inches long, and start reproducing. While there, they cause enough damage to eventually result in heart failure and death. In dogs, treatment is possible, but it is expensive and risky. And we canNOT reverse the damage that has been caused by the worms. In cats, not only is diagnosis troublesome at best, but the ONLY treatment is surgical removal of the worms from the heart, so prevention is key!

Did you know: dogs and cats may not exhibit any symptoms until heartworm disease is very advanced.

It is cheaper to prevent heartworms for a pet’s entire life than it is to treat their heartworm disease just once!

We will do our best to accommodate your busy schedule. Request an appointment today!

Font Resize
Contrast
Accessibility by WAH
Call Us Text Us